THE RT HON THE BARONESS WILLIAMS OF CROSBY 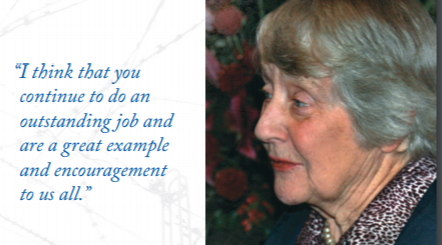 It is with great sadness that we learnt of the death of Shirley Williams.  Shirley was the Patron of Gatwick Detainees Welfare Group from the early 2000s until 2016.  She cared passionately about asylum seekers, she hated their mistreatment and she appreciated  the way that we express our value of migrants through our work.   In a letter congratulating Visitors of over 10 years’ service, she wrote:

“Thank you for your kindness to so many detainees.  If any of them remember this country kindly it will be thanks to you and the humanity and compassion you have brought to this difficult and demanding work.”

She felt very strongly that asylum seekers should be allowed to work and she desperately wanted to see a time limit on immigration detention.

Shirley  was very generous to us with her time and always responded to requests for help for individual detained persons, doing her best to stop flights and speaking to Ministers.   In 2006, she, and our other Patron Lord Dholakia, held a Reception at the House of Lords for GDWG and invited their friends and colleagues. She attended both our 10th and 15th Anniversary events and I spent many an hour waiting at Three Bridges Station for her – she was invariably late – but however late, she spoke brilliantly and passionately,  without notes.

In 2012, after she had attended the “Longest Day”, at the Hawth in Crawley, she spoke glowingly about GDWG in the Lords and said of the event:

“450 people turned up at a theatre in Crawley to listen to what the refugees had to say about what they had been through and about the songs and poems that had kept them going. This was a crowd of our fellow citizens, not specially selected but men and women who cared about the well-being of their fellow citizens.”

She went on to show her compassion, emphasising that it was the “human help to one’s peers” that was important and “not the endless, complicated, inexplicable and incomprehensible processes of immigration rules.”

She wrote in 2015 having learnt about our new venture, Refugee Tales;

“The new Canterbury Tales is a great idea.  I wish I was still up to walking many miles.  I will come to the event.”

In this letter she said she was now 85 and needed to retire and added;

“Being a patron of GDWG has been  inspiring.  I am only sorry that I was unable to get a time limit on detention into law”.

She is such a sad loss – a great mind and a very big heart.

This site uses Akismet to reduce spam. Learn how your comment data is processed.